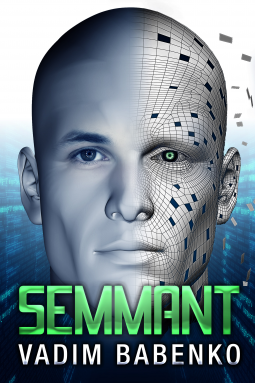 Ergo Sum Publishing was kind enough to make this eGalley available through NetGalley. Although it was provided to me at no cost, I am under no obligation to give a positive review.

Bogdan Bogdanov is a genius. Don’t take my word for it; ask him. He tells you as much early in the story. He’s unmatched when it comes to bits and bytes and putting it all together, especially when it comes to recognizing patterns. Not only that, he’s able to translate that genius to work on the computer where he creates the Holy Grail of artificial intelligence: a self-aware and learning machine which will not only learn from its mistakes but learn to anticipate and, yes, even show emotions.

In this incarnation we find the title character of the book, Semmant. Created as an exercise by Bogdanov to develop a program which can make money from the markets, Semmant learns from his mistakes and anticipates shifts and slides. But along the way, Semmant becomes much more than that: he learns to feel and like anyone who is new at that, sometimes it interferes with his day-to-day routine. Yes, he even falls in love.

Told in Bogdanov’s voice, the story is, regardless of what the title of the book says, about him first and foremost. And therein lies my only problem with the book: I never really got to where I cared about the protagonist. Now, make no mistake about it, I really got to where I liked Semmant and Lidia, Boganov’s primary love interest. Well, when he wasn’t bouncing around local houses if ill-repute, that is. Their relationship was on-again off-again and so volatile I was expecting a “War Of The Roses” type of finale, which isn’t far from where it started to go.

This book was written in Russian initially, but translated to English for publication. Babenko knows his stuff when it comes to AI and technology, putting aside a career in that field to turn author. As a computer developer and proud geek myself, I would have liked to have seen more technological aspects in the book, but being a work of science fiction, I suppose he had the have some vagueness. Still, I really wanted to know more about Semmant, not Bogdanov.

The prose in the book was a bit flowery and heavy at times, making it hard to plow through, but it’s not poorly written. It just makes me wonder if, when doing the English translation, a correct word was chosen instead of the best word.

And I hope you’re not offended by sex. While it’s not in-your-face graphic, it’s a recurring theme throughout the book. No graphic acts or anything like that, but it’s very omnipresent.

Overall, I thought this was a well-written book, and I love the way the author approached the concept of a self-aware electronic entity. The only thing that keeps me from giving it a top rating is that I never really cared about the protagonist. Lots happens to him, good and bad, but it always seemed like we were just skimming the surface of why he was like he was, other than being a super-genius lacking social graces. I also would have liked to have seen much more go into the titular character.