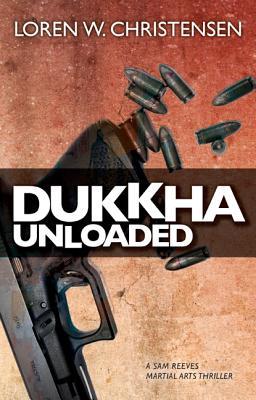 I received a copy of this book from YMAA Publishing Center in exchange for an honest read and review. Although it was provided to me at no cost, I am under no obligation to provide a positive review.

That said, YMAA is essentially just keeping a junkie addicted with what they’re giving me. Here I am, a martial artist, who respects the author for his real-world martial arts training advice, and they are offering me the third book in this series, having already provided me with the first two books? Yeah, please!

As noted in previous reviews of “Dukkha: The Suffering” and “Dukkha: Reverb”, I am a fan of the characters Christensen has created, especially Sam Reeves. Authors are always told “Write what you know.”, and Christensen takes this advice literally. He is a martial arts instructor, Vietnam veteran (Tip of the cap to all vets), and a retired law enforcement officer. Not surprisingly, Reeves takes on all those roles, although his LEO career is still active. This allows Christensen to breathe life and depth into his protagonist in a way that many authors can only dream of.

But it doesn’t stop there. Christensen has also created believable characters in Reeves’s and “sister” Mai as well as their father Samuel. Granted, a lot of what Samuel does can be perceived as superhuman, but hey, we all have to have goals, right?

OK, enough about all that, let’s get to the book.

As if you can’t already tell, I loved this book. It’s great to see the author still has some new ideas and circumstances to throw his protagonists into. He’s certainly not a one trick pony. While Sam was in Vietnam visiting family and making a dent in the human trafficking there, some hate crimes started cropping up around Portland. Just as Sam returns, the victims are Mark, Sam’s boss who also happens to be gay, and Mark’s partner. While Sam certainly would have wanted to stop the crimes, it suddenly became very personal.

Things are complicated enough for Sam without one minor detail: while in Vietnam he realized he never wanted to carry or fire a gun again. So now he has to track down the people responsible for these violent hate crimes, and he only has his bare hands, and whatever improvised weapon he can find, to assist him.

Of course, every well-rounded novel needs a little romance, and Christensen doesn’t disappoint. Naturally the biggest emotional tension is between Sam and Mai, the latter beginning the novel still in Vietnam. Will they continue to grow together, or will the distance make them drift?

So yeah, I really enjoyed this novel. Hearing even more books are in the works makes me nearly, yeah, I’ll admit it, giddy. It’s so refreshing to read a novel with genuine action scenes that I can picture while still maintaining the realism only a season veteran of violence can bring to the page.

If you haven’t read the first two books in the series, stop now, go get them, and read them. Then read this one. You won’t regret it.