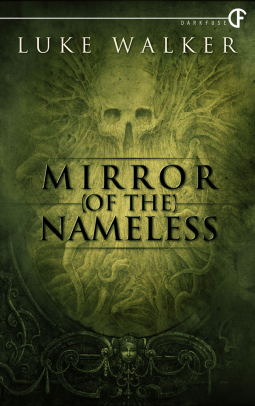 Via NetGalley, DarkFuse was kind enough to provide a copy of this book for the purposes of reading and reviewing it. While it was provided to me at no cost, I am under no obligation to give a positive review. It should also be noted this review is on an advanced copy of the book, which is not scheduled for publication until later in September.

This is the story of a dystopian world, presumably in a parallel universe as there are dates and events with a correlation to actual timelines. In this world, there are three evils gods, Naz Yaah, Segoth and Gatur, who are worshiped even though they rain down unspeakable horrors on their followers. Those killed are presumed to have been offered as sacrifices, and anyone who questions their existence or otherwise doesn’t pull their own weight in society are likewise offered as “sacrifices” by a heavy-handed police force and the occasional freelancers.

The readers feel the presence of Segoth and Gatur the most. The former is a 200-foot zombie whose falling flesh further infects those it comes in contact with, and the latter is a green mist which cause all in its presence to turn homicidal to all those around them, even loved ones. Once the mist lifts, parents are often found to have killed their children, lovers have killed their significant others, and of course there is plenty of random violence against anyone who happens to be nearby.

Enter into this mess, which is primarily set in England, Dave, who is looking for his missing daughter Ashleigh, and Tom, her boyfriend of about 18 months. Both want to find her as it appears she has convinced herself, through a now-deceased author’s writings, the gods are not to be believed and are not the true gods. As such involvement would certainly lead to Ashleigh being “sacrificed”, the two men set across the country to locate her and bring her to safety before harm can come to her.

Along the way, the men both witness and commit unspeakable horrors to those around them, not to mention being on the receiving end themselves. Will they find Ashleigh in time? Is the mirror she’s looking for the salvation of mankind or something else? Is there a way to stop these evil gods?

I enjoyed this novel primarily because it had a bit of a Lovecraftian feel to it, especially with the pure evil of the gods. Even their names seem to be a nod to Mr. Lovecraft. The flow and action is almost constant, and the short chapters made this a very quick read. It does seem like there could be a bit more of a backstory, although enough is revealed at the end to give the reader a glimpse at the origin of the gods. It seems there could be more character development as the only one that really feels fleshed out (with apologies for the term due to the presence of a zombie-like god in the story) is Dave himself. Tom is in love with Ashleigh, but we really don’t learn that much about him. Ashleigh is also the focus of the men’s pursuit, but we know little of her other than her being a free-spirit who is committed to her cause. A little more depth in this area would have helped.

I was provided a copy of this online magazine by the editor for the purposes of reading and reviewing it.

The theme of this issue was good / evil and what makes a person choose one path or the other. In that regard, the magazine certainly meets that goal. Each author takes a little different tack when approaching the subject, although each definitely has an edgy feel to it.

While not a big fan of poetry, the few sprinkled poems break up the prose offerings enough to provide a nice change of pace while still sticking with the theme.

I tend to be very much a fan of sci-fi / fantasy, but was pleased to see each of the stories in this issue are well-grounded in reality. While there are some very improbable or unlikely choices made by some characters, they are all realistic choices that could be made. At the same time, some characters were very human and did exactly what one would expect to do in the circumstance.

My favorite piece was probably “Zeke Stargazing” by Rachel Kimbrough. It certainly paints the picture of a Christmas nobody will soon forget.

I have bookmarked the web page for this magazine and will likely revisit them regularly to get copies of newer issues. I am definitely a fan of what they had to offer in this issue and can’t wait to read others. I would like to see some tighter editing of the stories, but this by no means detracts from the overall effect.