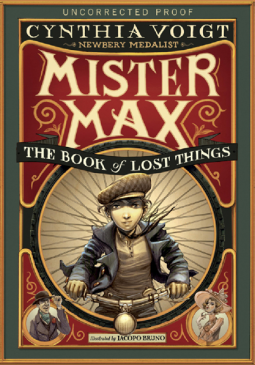 Through NetGalley, I was given a copy of this eGalley by Random House Children’s Books for the purpose of reading and reviewing it. Although it was provided to me at no cost, I am under no obligation to provide a positive review.

Max Starling is twelve years old when he accidentally gets separated from his parents, who are famous stage performers, as prepare to they sail to India to perform for a royal host. Fortunately he still has his Grammie to rely on for housing and food. But as time goes on, it becomes apparent the trip his parents took was not what it appeared to be at first. When nothing is heard from his parents besides a couple cryptic postcards, Max decides he must be independent.

Fortunately, Max is well-equipped for the task as he knows what it takes to be a good performer, having watched his parents up-close for years. The ability to play roles, including appropriate costuming, ends up being a skill Max is quite adept at, and it serves him well throughout the book.

Things begin rolling for Max when he receives a reward for finding a lost child who actually found him. Suddenly Max is in demand for finding lost things, which eventually morphs into problem-solving. Not quite a detective and not quite sure what to call himself, Max eventually settles on a new title: Solutioneer.

In addition to his ever-present Grammie, supporting characters include Max’s math tutor and roommate Ari and Max’s clever, pesky and loquacious assistant/partner/cohort Pia.

As Max solutioneers others’ problems, the main question remains: can he solutioneer his own biggest problem — what has happened to his parents?

When I saw this book was written by Newberry medalist Voigt, I had high expectations — and Voigt definitely delivers. While this book is aimed at children 8-12 years old, according to Random House’s website, it should be of interest to readers of all ages. There’s no dumbing down of the subject matter and plot. In fact, I suspect there will be plenty of words young readers will need to look up in order to increase their vocabulary, and that’s a good thing. There are even some math and geography lessons thrown into the plot.

It’s ironic this book is written better than an adult mystery book I recently reviewed, as this one is aimed toward children. The clues are there for you to mine if you’re paying attention, and they aren’t thrust into your face in an obvious manner.

The book is obviously the first in a series, and it ends on a bit of a cliffhanger, as you would suspect. I will absolutely have to check out the remainder of this series as the author produces them.