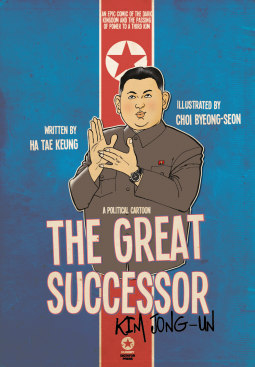 Due to my years of studying taekwon-do and other martial arts, I’m quite fascinated by Korean culture, even to the point of working to learn the language. With that in mind, this collection of political cartoons on the subject Kim Jong-Un’s succession as the leader of North Korea was right in my wheelhouse.

The folks who put this together are members of Open Radio for North Korea, and as the name suggests, they are not afraid to be brutally honest about what they see going on in North Korea. This collection of cartoons certainly pulls no punches.

Gathered here are cartoons that cover all three of Kim Jong-Il’s sons and tells of their history. Along the way we find out why Kim Jong-Un, the third son of Kim Jong-Il, ends up taking over instead of his older brother or half-brother.

What I enjoyed about it most was that it was obviously written in Korean first. While the narrative is done in English, there is plenty of Korean left in the panels, especially showing sound effects, labels on people and items, etc. Fortunately for those who don’t speak Korean, those remnants are helpfully translated, usually in the form of footnotes.

It also appears this collection ends in 2010 as that is one of the latest dates mentioned, plus it doesn’t address Kim Jong-Il’s death in December 2011 much less Kim Jong-Un’s formal ascension to power. It’s a shame it took so long to get here in America.

What I got the most from this collection was the glimmer of hope in North Korea. While the prospects of Kim Jong-Un becoming anything but a third-generation despot are slim, things are changing in North Korea. More and more often, its citizens are getting glimpses of what the rest of the world has to offer and, more importantly, how their living conditions truly compare to other countries. When this becomes too stark of a reality for them to take anymore, perhaps there will be a change. For the sake of those citizens, I hope it’s soon.